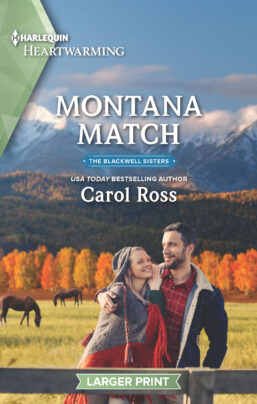 Is about family—and love!

Thanksgiving is the perfect time for Fiona Harrison to turn her life around. And she is sure finding a suitable husband will please her newfound family in Montana. When a dating app sends her every dud in town, handsome bartender Simon Clarke offers to be her matchmaker. If only Simon fit her criteria… Learning the truth about the twinkle-eyed charmer could change everything—but for better or worse?

Wow, all I can say is, why havent I read everything Carol Ross has written so far? She had my emotions all over the place. Once I started reading MONTANA MATCH it was very hard to stop! The twists and turns made it impossible to put down, I had to know what was going to happen to Fiona and Simon. What an awesome story. All of Carol’s characters feel genuine and relatable and put your emotions on one heck of a roller coaster ride. As you are reading, you will find yourself cheering for all of them, praying they can work out their problems and be happy once again.

It was all Simon could do not to step forward and gather Fiona in his arms. Reassure her that she could trust her judgment where he was concerned, that he was both her old and new type combined. But how would that help? Because ultimately, what he said was true—he was not the man for her. The husband, he reminded himself, she was looking for a husband. But neither were these guys she was dating. Frustration twisted inside of him. To busy his tempted hands, he reached up and scratched Mesa between the ears.

He said, “Fiona, I like you. I don’t want this awkwardness between us.”

“Me, either. I like you, too, obviously. I wish things were different for both of us.”

Fiona groaned. “Now I have to go back to dating.”

That moment, Simon recognized later, was his undoing. Specifically, that sound, the heart-wrenching sound of Fiona’s sadness, weariness and despair. It dug right into him and precipitated his final descent into foolishness. That, and the idea of watching her continue to waste time on these mismatched “matches” via her bogus family-influenced profile. What if she grew so tired of the process that she gave up and settled on someone? He couldn’t handle it if she ended up with some guy even weirder than Drew or as domineering as Gary. If she was going to go through with this husband search, she deserved one worthy of her. He needed to make sure of that.

“Unfortunately, I do,” she countered.

Fiona gazed quickly and impatiently skyward before focusing back on him. “That’s not exactly news, Simon. I’ve already told you I don’t. On paper, however, it should work.” She executed a theatrical air punch and forced a smile, and added, “It will work. Trying to stay optimistic here, but it’s getting difficult. I’m beginning to think I’m the problem.”

“You are most definitely not the problem.”

“Yeah? Well, so far… Never mind, I hate being negative. Ugh. Did you hear that? I just did it again. I’m usually not a negative person, but since I’ve moved to Montana things have not worked out like I thought they would and…” Her eyes widened as if surprised by her comment. “You know what? You don’t need to hear this. I’ll figure it out. I always do.”

“That is highly unlikely.”

“Neg-a-tive,” he crooned in a singsong voice. “We’re not doing negative anymore, remember?”

“I have a dating proposition for you.”

“I’m not talking about me,” he said. Just gathering the words felt painful, but he forged on, “Shut down your dating profile, and I’ll find you a guy.”

Her eyebrows darted up as her mouth opened and then snapped shut, leaving an expression that reflected the pure bizarreness of the suggestion. “You are going to find me a guy?”

“I know a lot of people around here.” Ned and Val knew even more. He would enlist their advice, he decided, growing more encouraged by his suggestion. “Let me be your matchmaker.”

“Why would you do that?”

“Because I care about you. I can’t stand to see you on these dates, disappointed over and over again.” If that gave away more of his feelings than was wise, he didn’t care.

When she didn’t answer, he posed it another way. “How is my setting you up with a guy I think you’ll like, and who I think is worthy of you, any different than your family helping you fill out your profile to attract a certain type of guy?”

“Are you saying that you think you can do a better job of finding me a potential husband than my own family?”

“Well, I know you and I know the guys. So…” He shrugged one shoulder dramatically. “What do you have to lose? I’ll be leaving in a few weeks anyway. If it doesn’t work, you reactivate your profile and go back to doing it your way.”