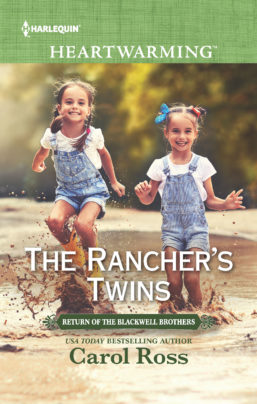 Return of the Blackwell Brothers Book 1

She’s not the country nanny he advertised for

But she could be perfect for him…
Jon Blackwell needs a woman ready to tackle the duties of a cattle ranch and two lively, take-no-prisoners twin girls. But ever since Lydia Newbury showed up at his six-generation Montana spread, the frazzled single father is rethinking, well, everything. The Philadelphia dazzler is a marvel. What he doesn’t know is the secret that has Lydia on the run…

LYDIA STEPPED INTO his arms. He gathered her close, his lips finding hers. The kiss was different this time. With feelings clearer, there was less desperation and so much more sweetness.

Jon adjusted his hold and trailed kisses along her neck. When he whispered, she could feel his lips brushing against her skin. “I’ve wanted to do this for so long. Kiss you right here. You smell so good. You always smell so good.”

“Ha. Like cows?” He drew back to look at her face and Lydia felt her heart clench when she saw the uncertainty there. He was such a steady, rock-solid guy that these flashes of insecurity from him always surprised her. And they made her despise his ex-wife.

Cupping his face in her hands, she kissed him. “Yes, like cow and horse and hay and sweat and Jonathon Blackwell and sweet Montana air. You could bottle it and call it Sexy Cowboy and sell it for an ungodly amount of money.”

“Sexy cowboy,” he repeated and then Jon pressed his forehead to hers. With a groan he closed his eyes. “Do you really mean these things that you say to me? About the girls and me? And the ranch and Montana?”

“Ava was one woman. I know for a fact you’ve had others. I can name at least five women who’d like to join them and one who’s dying for another chance. And another one who is standing right in front of you wearing her heart on her sleeve. Why is Ava the one that you remember? Why do you let her ruin this for me? For us?”

“I don’t want her to… I hate that she does. I guess because it was such a failure. I don’t like to fail. Usually when I try hard enough, I succeed. I gave her everything I had and plenty that I didn’t. And it wasn’t enough. I wasn’t enough. Then we had these two beautiful, perfect children together. How could they not be enough?”

“I don’t know.” Lydia blinked and then swallowed her tears. Because this was important, and he needed to hear it. “But you have to let her go. You don’t need her. The girls don’t need her. If what I hear is true, you’re all better off without her. Honestly, I suspect that deep inside she knew that. Leaving you is probably the most unselfish thing she could have done. And I know it’s selfish on my part, but I’m glad she did. Because otherwise I would never have had this chance.”

He smiled and Lydia could feel it, that she was getting through to him.

“Me, too.” He kissed the corner of her mouth. “And just so you know, Ms. Lydia, she never made me feel this way.”

“Giddy. Like I’m losing control. No, like my mind is possessed, like you’ve taken over a part of it. Because you’re always there. Every morning I get up and wonder how long I can loiter around the house before you get up so we can have coffee together, or I can at least catch a glimpse of you before I head out. Then I plot and scheme about how I’m going to work my schedule so that I can get back to the house and have lunch with you and the girls. Or even just see you for a few minutes. And this last week when you came into my office in the evenings, it was the unqualified highlight of my day.”

Happiness roared to life inside of her. It felt like her heart had caught fire.

“When I was married, I used to dread coming in at night because I never knew what kind of mood I’d be facing. But you… You always seem to be in the moment. Whatever you’re doing, it’s like you try to squeeze whatever joy out of it you can. It’s contagious. And I love that you’re setting that kind of example for my girls. They haven’t been happy like they are with you in a long time. Not since Annie died.”

His expression was filled with a satisfaction that, incredibly, seemed to match Lydia’s own feelings.

He said, “I can’t believe how different you are than I thought you’d be.”

“It’s nice to finally hear you say that,” she teased.

“After I say this last thing, I’m not going to talk about Ava anymore because you’re right—we don’t need her. I’m ready to leave her behind. But I want you to know that you’re nothing like her. I mean she wasn’t all bad, obviously, or I wouldn’t have been taken with her. But being with you is so easy. Where she was all hard edges with this cold essence, you’re so soft and inviting.” His hands wandered down her back to lightly grip her hips. “And I’m not talking about your curves, although I can’t stop thinking about those, either.” He brought a hand up and placed it over her heart. “It’s this right here that I’ve fallen in love with. And your spirit that is warm and kind and so generous it leaves me a little awed.”

“Jon…” A soft sob of joy halted her response. She swallowed it down. Then she shook her head and said, “My cowboy is a poet.”

“I don’t know about that, but your cowboy is in love.” Eyes shining, he went on, “And the way you love my girls… I don’t even know how to say how that makes me feel…” He shrugged helplessly.

“They are easy children to love. As easy to love as their father.”

“Lydia…” He paused, and she watched him swallow his own lump of emotion. He kissed her again and then held her. With his face buried in her hair, he said, “It feels too good to be true. I’m sorry I doubted you. But you have seemed too good to be true from the start.”

Like flipping on the lights in a dim, cozy room, his words woke her up. Because he was right—it wasn’t true. She wasn’t true. Not like she wanted to be. Her actions were genuine, her love was real, but they had no future. She had to find a way to let him go without breaking his heart.