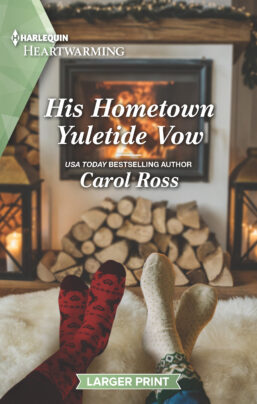 All he wants for Christmas

Is a second chance…

Derrick Bright’s baseball career may be over, but his brother’s is just starting—until a scandal threatens to end things. PR specialist Anne McGrath hasn’t spoken to Derrick since he left her eleven years ago. But she agrees to help for his brother’s sake. Escaping the press in Pacific Cove allows them to reconnect. Will she accept Derrick’s vow and make his Christmas dreams finally come true?

Bottom Line: His Hometown Yuletide Vow is a sweet second chance romance, with a timely plot and great character growth. The romantic tension that hums between Derrick and Anne strikes against their harbored hurt and anger to set off more than one kind of spark, and readers will love how it all turns out. The subtle messages that form the framework of their story are ones that we would all do well to embrace. A delightful read for Christmas, Valentine’s Day or any time of the year!

“I didn’t even know you were participating in the auction until I saw the program tonight. Before I could find you myself, a friend introduced me to Todd, and Todd asked if I’d be willing to meet you…” Derrick’s mouth pulled up on one side like he was trying not to smile. He was all boyish innocence and every bit as appealing as Anne remembered as he added, “He, uh, he actually asked me if I’d flirt with you a little.”

Anne choked out a surprised laugh. “Thank you for sparing us both that awkwardness.”

Grinning, he assured her, “It wouldn’t be awkward for me.” His gaze traveled down and settled on a spot. “You have a little smudge of something on your dress. Let me guess—ice cream?”

She frowned. A combination of embarrassment and discomfort blazed through her. How dare he draw on their former intimacy like this?

Glancing down, she tugged clumsily on her wrap and thought up a lie. “No, it’s, um…oil.”

“Yep.” She shrugged and stared him down. “Moonlighting on the oil rig.”

He started to smile, to call her out, but then seemed to pick up on her back-off signal. He cleared his throat and composed his features. “How have you been, Anne?”

“For all eleven of the years it’s been since I’ve seen you?” She heard the clear edge in her voice. There was a chance she hadn’t gotten over this quite as well as she’d believed. But you know what? What he’d done had been really…hurtful, and perhaps she was still a tad angry. Now that she thought about it, there was no rule stating she had to make this reunion easy on him.

“Well,” he retorted, “if you want, you can start with what exactly happened eleven years ago and go forward from there?”

Was he serious? Yes, she realized with a jolt that only an insight of this magnitude could induce. Because, from his perspective, she’d been the one who’d ultimately ended things. And, granted, she hadn’t done so in the classiest manner.

She’d sent him an email. Yep, she’d broken up with him behind the comfort of her keyboard. In her defense, she’d been devastated after already being devastated. Derrick had been her first serious boyfriend, her only love story, tragic and clichéd though the ending had been.

“Wow,” Anne said, still dazed. Thinking, stalling, she let her gaze travel around the room. “I can’t believe this. I don’t know what to do or how to make this right.”

She looked at him again. “How?”

“For starters, you can let me kiss you again,” he said, lowering his head as if to do just that. “Like I should have done that night, and every night since.”

Heat flooded her bloodstream. Now she remembered how romantic he could be, too. Irresistibly so.

At that moment, she would have let him kiss her. She wanted him to. She looked up. He dipped his head but halted just shy of contact, and with his mouth almost brushing hers, he said, “But then you’d be doing to Todd what you thought I did to you. And I don’t think you could forgive yourself for that.”

Todd! Another shock went through her, immediately followed by a proper douse of shame. What in the world was wrong with her? Derrick was right; she was the worst kind of person.

“Um, right, yes. Todd and I are… You know what? I think we both need time to process all of this and—”

“I don’t,” he stated firmly. “I don’t need time, Anne. All I need is for you to break up with Todd. Call him right now, or maybe it would be better to do it in person. Whatever works for you.” Grinning, he added, “I don’t, however, recommend an email.”

“I am completely serious. I’ve never cared about anyone the way I did about you. Our breakup was a misunderstanding. We should still be together.”

“So you think we can just pick up where we left off eleven years ago?”

“Yes. As soon as you end things with Todd, then absolutely we can explore what this is between us. Anne, I still have feelings for you. I always have. And I bet you still feel something for me.”

Derrick’s eyebrows drifted upward while a teasing glint flittered in his eyes. “That would be ideal, as far as I’m concerned. But you should take some time to be sure.”

Her stomach cartwheeled. “You know very well I meant with Todd!”

“You’re not,” he stated confidently.

“How in the world could you possibly know that?”

“Are you in love with Todd?”

“Well, it’s not…” She’d walked right into that trap, hadn’t she? “It’s complicated.”

Shaking his head, he let out a chuckle. “No, it’s not. You either are, or you aren’t. And you two don’t act like a couple in love.”

“How would you know?”

“Because I was in love with you! The entire night of the auction, I saw you and Todd together for a total of about seven minutes, which was the time it took for him to introduce you to me. Then he took off. You wandered away. You didn’t spend the evening together. And Todd was…” His sentence trailed off, but Anne didn’t care because she needed a moment.

Derrick had been in love with her? A fresh pang cramped her heart. Maybe if he’d told her that all those years ago, she would have been more confident; she would have questioned what she’d seen and marched right up to “him” at the party… What was the point in speculating about this? Just as she feared, it was only causing more pain. Granted, not in the manner she’d expected, but a different reality was here just the same, in the present, where she and Todd were a couple. Todd was a decent man, a good guy, and he deserved her loyalty.

“Todd was what?” she demanded, now feeling fidgety and a little irritable because what did Derrick know about her and Todd’s relationship?

“He just seemed awfully…” He paused, searching for a word. “I’ll go with busy. I didn’t see you hanging out together at all, not until the auction. And then, you didn’t even leave together.”

“Of course, he was busy! He was chairman of the auction committee. And that’s how our relationship is,” she said, disliking her defensive tone. “He does his thing. I do mine.” Realizing how that sounded, she quickly added, “And we do plenty of stuff together. It works.”

“Sure, it does,” he agreed with a shrug. “If you’re not in love. Do you remember how when we were together, we couldn’t stand to be apart? Even when we were at a party or an event, we gravitated toward each other. Most of the time, we couldn’t wait until we could leave and be alone.”

Anne’s heart knocked against her rib cage and then began beating a wild rhythm in her chest. All of this was true. Sometimes, they’d set a time limit for how long they needed to stay and not appear inconsiderate or unsocial. When they were at an official function, and she was acting as his publicist, she’d forbid him from staying by her side the whole time.