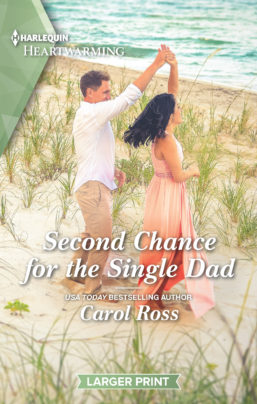 She’ll save him a dance…if he follows his heart.
Dance teacher Camile Wynn has a new student. Reclusive Rhys McGrath is learning to waltz so he can take his orphaned niece to a father-daughter dance. Camile is surprised by her connection with him, but there’s a generous heart behind Rhys’s awkward exterior. When she learns Rhys could lose custody of his niece, Camile goes behind his back to help him…but will her lies end up hurting him instead?

Emotionally captivating! With our latest visit to her fictional town of Pacific Cove, Oregon author Carol Ross delights readers once again with the perfect combination of turmoil and sass as we meet a so-called recluse and a lovable friend to all. The past they share and current happenings kept me riveted from start to finish. Really enjoyed Camile and Rhys! ~Amazon Reviewer

I’ve enjoyed every book I’ve read by Carol Ross, but I think Second Chance for the Single Dad is my favorite so far! I loved everything about it. ~Amazon Reviewer

Two lessons, one dance, Camile reminded herself. Get in, get out, done.

“Now, this time, don’t stop. Just keep box stepping, and I’ll do it with you.” They performed the movements together with Camile counting and snapping her fingers.

Still moving, she danced around in a half-circle until she was facing him, mirroring his steps. “Excellent. And there you have it. Now you’re going to try it with me.”

He stopped in his tracks, brow lines back in full force.

Facing him, Camile patted her left shoulder and instructed, “Right hand here.” He complied, and she ignored how nice the heat of his hand felt as it seeped through the thin fabric of her tank top. “ Left arm up.” He obeyed. Silently, she admitted there was something vaguely satisfying about barking orders at him. But this action, the press of his palm against hers, the feel of the work-roughened texture of his skin, her hand enfolded in his, was slightly more difficult to ignore. She told herself it was just the shock of it all, being here with him. Dancing.

“Ah,” he said, tilting his chin toward the floor again. “Now I see why you’re wearing heels.”

“Is that your way of insulting my height?” she joked, breaking her own rule before she could stop herself.

He brought his gaze back up and locked it on to hers, and Camile was a little taken aback by the intensity she saw there. “No. Absolutely not. Why would that be insulting? I’m sorry if you took it that way.”

“Um, it’s—it’s fine,” she stammered. “I was joking. I know I’m short. It would be difficult to forget as the only short person in a family of very tall people. You know, recessive genes or whatever.”

“That would not be the case,” he said. “Height is polygenic. And there are other variables. It’s more quantitative than that. So the term recessive doesn’t apply when it comes to height.”

Camile squinted up at him, trying to decide if he was serious. When he didn’t blink, she said, “I know. At least three genes are involved and like six alleles, right?” Genetics had been one of her favorite premed courses. “Plus, there are nutritional and environmental factors. I wasn’t being literal. I was exaggerating for effect. Making fun of the fact that I drew the short straw in my family.” She added a wink.

Gaze narrowed in on her, he shook his head a couple of times very slowly as if thinking carefully about how to respond.

Embarrassed by her lame joke, she clarified, “That was a bad pun. Sorry.”

When he spoke, his eyes traveled over her while his mouth hinted at a smile. “No, you’re wrong. It was not a bad pun. It was a very good pun. But there’s nothing inferior about your genetic fate. Quite the contrary. Height is also a very subjective preference as far as attractiveness goes. Studies have shown that shorter women with discernible curves are the most symmetrically pleasing. I happen to agree with the consensus.”

Camile stared into his earnest blue eyes and felt her lips part. What the…? Her neck went hot as she tried to wrap her brain around this moment. Obviously, the man was brilliant in a way that resulted in a unique perspective. But the part that had her speechless was the fact that he’d just given her a really lovely compliment. Like, spellbindingly good. And he seemed sincere. Granted, the delivery wasn’t the smoothest, but the meaning was there. It also caught her off guard and made her feel warm in even more surprising ways. Ways she shouldn’t feel. Not with Rhys McGrath, date absconder, social snob and possibly worse, if any of the rumors were true.