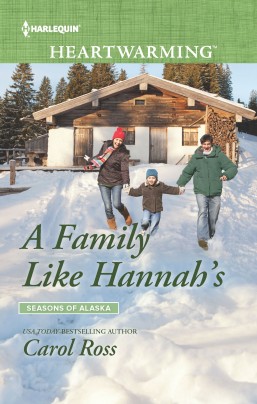 Starting over is serious business

With her professional skiing career cut short by an accident, Hannah James is putting all her energy into transforming Snowy Sky Resort into something special. There's only one obstacle. Famous pro-snowboarder-turned-consultant Tate Addison has his own ideas about taking the Rankins, Alaska, lodge to the next level. But Hannah won't compromise her dreams. She gets that Tate is trying to create a stable home for his orphaned six-year-old nephew—a boy Hannah already adores. And if she isn't careful, she could also fall for the boy's too-attractive uncle. Is she risking heartbreak? Or do she and Tate really want the same things out of life?

“Hannah, I didn’t really come here to talk to you about that. I was just… If you could spare a few minutes I’d like to go over what happened at the board meeting.”

“I do.” He went on before she could argue,

“You probably don’t believe this, but I only want what’s best for Snowy Sky. And for Lucas, for my family. My recommendations make perfect sense and if you would take the time to get past your disdain for snowboarding you would see that. You’re a smart woman and—”

She let out an impatient sigh. “Don’t patronize me. I know I’m smart. And I have no disdain for snowboarding. I just don’t think it’s necessary to structure the resort around it, not to mention take on the added expense, which we clearly interpret differently. But what does any of this have to do with Lucas or your family?”

“Would you please come down here so I can explain?”

“Explain what? How you ambushed me? I may be young, I may not have a college education, I may not look the part of a businesswoman to you, but my only mistake was in giving you the benefit of the doubt and believing your Mr. Nice Guy routine.”

“Mr. Nice Guy routine? I wasn’t… Would you please listen to reason?”

“Reason? I thought you were just giving your opinion? I thought that’s what you were hired to do—consult. Give your opinion. But I guess that was before you decided to take over my resort, which in essence answers your question about why I’m not reasonable on this topic. Snowy Sky is mine.”

An exasperated sigh escaped him. “Except, that it’s also mine now, too. And a few others’, as well. All of whom should have a say in what happens with it.”

“You’ve already had plenty to say. And I haven’t stopped you from saying any of it, have I? In fact, I kind of helped you out there. A heads-up would have been nice, you know? I wasn’t anything but accommodating to you. And then you stabbed me in the back.”

“Stabbed you in the back?” he repeated incredulously. “I did not… That’s ridiculous. If you would have asked me what I was going to bring to the board I would have told you. In fact, I was a little surprised you didn’t. That confirmed my initial impression that you were rather ambivalent about the whole thing and I…” His neck hurt so he looked toward the side of the building as he kept explaining.

When he looked back up again she’d disappeared.

“Hannah?” he called out, only to be hit directly between the eyes with a snowball. He sputtered and took a step to the side, wiping his face before looking up again. “Did you just hit me with a snowball?”

She peeked over the side of the roof. “Yes, I did. Anything ambivalent about that, Tate?”