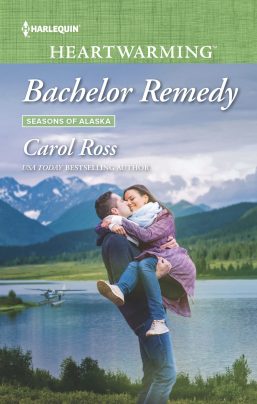 She’s the most unconventional woman he’ll ever meet…

And the cure for a perennial bachelor?

Raised by her healer grandfather, former army medic Ally Mowak knows her alternative approach to traditional medicine puts her at odds with most of her Alaskan town. That includes Tag James, the rugged transport pilot with the sprawling family and political ambitions. Ally couldn’t be more wrong for the aspiring senator. Then why does everything feel so right when they’re together?

THE WORDS SHE spoke didn’t even penetrate Tag’s brain, or maybe he wouldn’t let them. But that thought would only occur to him later, because the sweetest lips he’d ever tasted were moving over his and he couldn’t think past how incredibly good it felt. And right and… He twined one hand into her hair right next to her scalp, the other he curled around her shoulder so he could deepen the kiss.

He coaxed her lips apart, and she seemed to melt into him, her fingers digging into his shoulders. He groaned. She responded with a soft little moan of her own, unleashing a not-quite identifiable emotion inside him. Almost like fury, but not quite, because while the air was charged around them, there was a lightness inside his chest. And he realized that he never wanted to let go. Pulling her closer, adjusting so that more of her body pressed against his, he moved his mouth over hers, fitting it closer because he couldn’t seem to get enough…

He had no idea how much time had passed when she pulled away, just enough so that her mouth still hovered over his. She was breathing as hard as he was, and after a few seconds, her raspy chuckle worked into him like a caress. He would have kissed her again, but she was talking…

It took a moment for her next words to compute. “Stop worrying about my age and tell me how you really feel.”

Bees were swarming through his thoughts. Slowly he tuned out the buzzing and focused on her lazy-lidded eyes and swollen lips. Ally. So, so beautiful. Wayward strands of her silky black hair stirred in the breeze. She looked thoroughly…kissed. No, it was worse than that. A sick feeling rushed in, dousing the heat that had been muddling his brain only seconds before. What had he done?

“Ally, we…” We what? Not we, I. How could he make things right? Apologize? She’d kissed him, yes, but he’d let her. He’d more than let her; he’d kissed her back without an ounce of restraint and precious little self-control. And that wasn’t like him. He’d never lost his mind quite like this before, not even back in high school when he was young and reckless and…and she made him feel things he’d never felt before.

Languid brown eyes stared back at him without any regret or hesitation reflected there. Which made him feel about a million times worse.

“Oh, no…” Shifting, she sat up straighter. The fingers of one hand burned into him where they still clutched his shoulder. Her other hand rested on his forearm. “You’re not going to say we shouldn’t have done that, are you?”

Reaching up, he removed the hand on his shoulder so he could think. One deep breath later, he did the same with the other. Another breath and words still weren’t coming to him, not rational ones, anyway.

She interrupted, “You mean I shouldn’t have? I kissed you.”

“No, I mean, I know you did. But I shouldn’t have let you.” “Let me? You seemed to enjoy it. In fact, you kinda took over there at the end. Which is no surprise. You’re used to being in control, huh? To having things go your way?”

“No! I mean, yes, of course, I enjoyed…kissing you. Obviously. But we shouldn’t have. And we’re not going to do it again. I should have, I mean I shouldn’t have…and, yes, I like being in control of…certain things. But what does that have to do with this? I don’t even know what I’m saying…”

Words lost, thoughts jumbled, he scraped a restless hand along the bench beside him. Eyes sparkling, she watched him, her mouth a perfect, satisfied half grin, and he realized just how ridiculous he must seem. He chuckled, but it sounded painful even to him. “You have this singular ability to leave me tongue-tied.” It was this way she had of not saying anything and then finally saying exactly what she thought. And this complicated, intense, amazing, uncomfortable thing that had just happened between them wasn’t helping.

She beamed. “You want me to untie it for you? Bring it here again, and I’ll give it a shot.”

Like that. He groaned. “Ally, please don’t…” Her eyes were fixed on his mouth, and he wanted to kiss her again. And again. And forever, maybe. What was he thinking? He couldn’t. This was insane.

“You.” A long moment stretched between them while he stared at her and tried to come up with words.

“Me?” she finally prompted him.