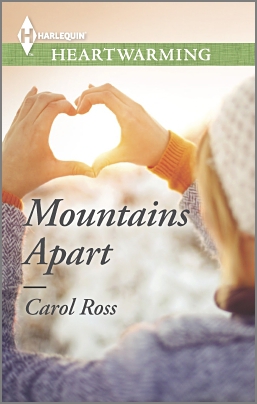 Winning this battle could mean losing it all

San Diego workaholic Emily Hollings doesn't eat fish, doesn't wear flannel shirts and certainly doesn't fraternize with the enemy. So why is she finding herself charmed by Rankins, Alaska—her company's next development target—and the leader of its hostile opposition, Bering James?

She must be more burned-out than she thought. Her professional reserve is slipping. And she's starting to fantasize about a life beyond work…a life like Bering has here. Maybe they can put their professional differences aside and explore this…friendship. Or maybe she's just deluding herself. Because one of them has to win.

"Sparks fly between these two from the moment they meet and even as the battle lines are drawn, love seems to be building as well. It will take a miracle for this romance to survive. Ross' characters are fun, feisty and the story is set against the backdrop of the beautiful Alaskan wilderness." -RT Book Reviews, 4 stars

"I adored this book!! The storyline, setting, characters and conclusion were all well developed, and I remember thinking on several occasions how I couldn't believe this was the author's first novel. I thought it was so well written. There were laugh-out-loud moments, some treachery and deceit, and of course a sweet romance. The story flowed so nicely—I never felt bored. When you can get lost in a story you know it's a winner, and since that's what Mountains Apart did for me, I'd call it a winner. I recommend it to anyone who loves great wholesome romance novels." -czynkbooks

"This book proves that despite any type of circumstance, personal or otherwise, true love will bring two people together. Not only is it well-written, it is a refreshingly realistic romance filled with quick wit and wonderful characters. Even if romance novels aren't your favorite, you will still find yourself smiling as you read this book. I most certainly could not put it down. Carol Ross has my utmost respect and I look forward to seeing more work from her! She's incredibly talented!" -Amazon reviewer

Bering hated the idea of waking her, but he didn’t want her to miss the show. He dropped to one knee before the sofa. He couldn’t resist pressing his lips softly against her brow first. Then he stroked the soft skin of her cheek with his knuckles. “Em? Emily?” he whispered close to her ear. “Wake up.”

Emily sighed and opened her eyes. “Bering?” She murmured his name and blinked a couple of times. Then she sat up quickly. “What…”

She ran her hands over her hair tucking pieces behind her ears as she did so. “Oh…now I’m embarrassed. I never do this.”

“Why would you be embarrassed? Naps are good for you.”

“If you’re three years old,” she countered. She stretched and looked around languidly. Then she gasped and stood. She walked toward the window. The night was black but stars and shafts of glowing colors were lighting the sky.

“Northern lights,” she whispered the words, clearly awestruck by the glistening, swirling colors sweeping and dancing across the sky and seemingly right in through the cabin’s window.

“I thought you should get a good look from up here on the mountain while you are in Alaska.”

A breathless “Wow” escaped her lips.

“I know we aren’t supposed to discuss this today and I know I’m the one who called for this cease-fire, but this is just one of the many, many reasons why I love it here.”

“Bering, if this is your idea of sneaking in a little campaigning, I’m okay with it,” she joked softly. “I’ve never seen anything so incredible in my entire life.”

They watched silently for a long time. Bering wanted to take her hand, to touch her, to kiss her. He wanted…her. He squeezed his eyes shut and willed himself to get a hold of his emotions. It was too late. He was owned, he realized, with both resignation and despair. He was owned by Emily Hollings, a city girl who worked for his arch enemy. Was there some possible way they could make this work?