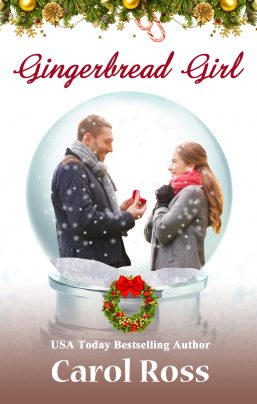 Your favorite Harlequin Heartwarming authors are back with ten all new Christmas stories set in charming Christmas Town, Maine. This year, a stocking brings a special holiday wish to each story.

Kinley Reed and Ian Mackey’s teenage rivalry-friendship was both frustrating and bittersweet. After he crushed her heart, Kinley was glad to see Ian go. But now he’s back. Both successful architects, they soon find themselves in competition once again. Ian also needs Kinley’s help to save his troubled sister. Can Kinley set the past aside? Will Ian finally win the love of his gingerbread girl?

“I found you a judge for the gingerbread thing.”

“Amber, are you serious? This is the best surprise ever!” Kinley paused because she had to ask, “You’re sure this person is qualified?”

Not just anyone could judge a contest of this magnitude. They needed to possess certain qualifications, such as a background in graphics, specialty baking, art, design, interior decorating or some other artistic field. A love for creating and an eye for detail, in other words, was mandatory. Gingerbread house building experience was preferred. It probably didn’t help that in the last four years that the contest had been under Tanner & Dunn’s sponsorship with Kinley in charge of judging, she’d only asked one judge to return. Hazel McIver, owner of Plum Pudding Cottage. The dollhouse store owner and Kinley were on the same page where this contest was concerned.

Apparently, word on the street said Kinley was “difficult” to work with. Whatever. She didn’t care. These entrants deserved diligence and respect and nothing less would do.

“Would I be sitting here beaming about it if he wasn’t?”

“Hold one, I’ve got his name here somewhere…” Amber patted her pockets. “Wait for it.” Making the drumroll sound with her tongue, she dug into her bag. No one could drumroll like Amber. Kinley was envious. She could barely whistle.

“How long do I have to wait?” Kinley teased.

Amber flashed her a playful scowl but somehow kept searching and drum-rolling all at the same time. After pulling out the tiny notebook she always kept with her to jot down jokes and “greetings,” she ended the riff with a flourish and said, “He’s an architect!”

“An architect? But I know all the architects in town and the neighboring towns and the county and…beyond. I’ve pretty much called them all. Who is he? Where’s he from?”

“Just a sec,” she said, fingers flipping through the pages. “He’s from out of town, but he’s here in Christmas Town for the holidays. I’ve got his name and info here…”

Kinley’s cell phone chimed, alerting her to a text. Shoving off with one booted foot, she steered her wheeled chair back across the span to her drafting table.

“Hmm,” she said, not recognizing the number on the display. Swiping a finger across the screen, she read the word and recoiled like she’d been snake bit. No, a snake bite would be better, she decided, inching close again to stare at the message. There was anti-venom for a snake bite. But there was no cure for this malady.

One word. One simple little word had her chest knotting tighter than the tangled mass of Christmas lights currently bunched in the cardboard box on her living room floor. Sweat pricked the back of her neck and made her armpits itchy.

She stared at it, thought about picking up the crystal paperweight on the edge of her desk and crushing the offending contraption to smithereens. But what purpose would that serve? She’d be out a phone. And besides, wouldn’t he love that? To hear that she’d destroyed her phone after receiving his evil, single-worded piece of harassment?

She read it again; Perspicacious.

How she hated that word. Unwittingly, her sixth-grade self recited the definition: having a ready insight into and understanding of things. Shrewd, perceptive, astute, observant…

And that’s when it all came together. Gingerbread, architect, judge… It couldn’t be, could it? He lived in San Diego now where he designed huge, complex commercial buildings and ginormous McMansions for drug dealers, movie stars, crooked politicians, and other famous/infamous people and pulled down skyscraper-high six figures a year. But it had to be him. It had to be because no one else in the entire world could text her one word and unhinge her so thoroughly and completely.

Far away on the horizon of her consciousness, she was aware of Amber still mumbling and thumbing through notebook pages. “Oddly enough, he said he would contact you. And did I mention how good-looking he is? His eyes are even bluer than yours. His name is, hold on… I promise I have it.“

No one else had correctly spelled that word in the sixth grade to beat her in the spelling bee and win the glorious microwave-sized trophy she’d coveted. And then gone on to steal pretty much everything else she wanted through the ensuing excruciating, second-placing years of her life known as middle and high school.

No one else took pleasure in humiliating her like this.

Kinley squeezed her eyes shut and bit off the name through a jaw clenched so tightly she was sure that not even a shot of Novocain would dull the shooting pains now knifing through it, “Ian Mackey.”

Amber snapped her fingers and then pointed at Kinley. “That’s it! Ian Mackey. How did you know?” Her attention drifted to Kinley’s phone where the message still glowed on her desk like a red-hot chunk of coal. “Oh, did he contact you already? That’s awesome. He must be really excited.”