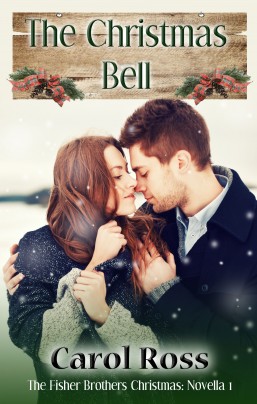 The Christmas Bell, (2015) Part of A Heartwarming Christmas: A Boxed Set of Twelve Sweet Holiday Romances.

With high hopes and some misgivings, Ben Fisher has hired antique dealer Andrea Talbot to help him track down the perfect gift for his fire chief father—Christmas Town’s original fire bell. But searching for the bell alongside his former high school crush isn’t nearly as simple as Ben anticipates, and neither, he soon discovers, is his relationship with Andrea.

Not a subject Ben wanted to broach considering their history. Instead, he found himself blurting, “Your hair used to be so much lighter back in school.”

Andrea winced and dipped her head to one side. “Highlights,” she explained. “I had this silly idea that I should be blonde. Now I’m just…me.”

“It was silly. The brown shows off the blue of your eyes so much better. They are a lot bluer than I remember. And your hair color complements your skin tone.”

“My skin tone?” she repeated teasingly.

He grimaced. “Sorry. Too much design work lately. Colors and graphics and stuff.”

“Oh, I wouldn’t say too much. A girl likes a compliment. Leaving off the half-inch of eyeliner and the globs of mascara probably helps, too.”

“Whatever it is, I like it. You look so…genuine.”

She looked startled, and he worried he’d offended her. Or worse, what if she thought he was revisiting that long-ago crush?

He started to apologize, but she flashed him a dazzling smile that stopped his heart. And his brain. He looked into her eyes and realized that was a mistake, too, because those ocean-blue depths were stirring up feelings he probably shouldn’t feel for a friend.

“I’ll take that as a compliment, too, if you don’t mind?”

“I meant it as one,” he managed to utter.

“I gave up trying to be perfect a long time ago, much to my father’s dismay. It’s very liberating.” She chuckled wryly, but he thought he saw a flicker of sadness in her expression before she turned away. She grabbed a box of rice and placed it into another basket.

Bradford Talbot had a reputation as a difficult man to work for in his cardboard distribution business, critical and demanding. Surely he wasn’t this hard on his daughters, too?

“How could you possibly be disappointing to your parents?”

“How much time do you have?” she joked.

He opened his mouth to assure her he had all the time in the world, but she stopped and turned toward him, her gaze traveling over him in this assessing, captivating way that tightened his chest and stole his words. Again. In spite of how he reassured himself, there was definitely still a bit of that beauty-and-the-geek thing going on inside of him.

“You look different, too, you know?” she teased, sidestepping his question.

“Yeah?” He wasn’t prone to conceit, but was well aware of the fact he’d been a late bloomer.

“Yep, you got super ugly. Sorry, but yikes, I can barely stand to look at you.”

He laughed. Andrea’s knowledge of antiques blew him away. Combined with her focus, tenacity and work ethic, it was no surprise she was so good at her business. What had surprised him over the last several months was this, her warmth, quick wit, and interest in his life. Even though he couldn’t quite squelch the nagging question of how much of that interest would exist if it wasn’t for the bell?